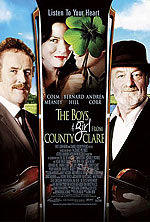 Hey Music Friends, specialy the Irish Whistle players out of the Forum

Looking for something to do on this Weekend? No good TV Programm?
I have a Tip for you. Lets watch a great Music Movie together, on Youtube.

Some weeks ago i found on Youtube the whole Music Movie “The Boys from County Clare“.
If one of you dont know this Movie yet, its about Irish Ceili Bands, its played by well known Actors and its fun to watch. Even young Andrea Corr is seen in this Movie but not playing an Irish Whistle as one may expect but faking to play the Fiddle.
I was wondering about the possibility to see such a movie for free on youtube because of copyrights and specialy that i was possible to watch it on youtube gemany (many things we cannot see because of copyrights) And i am not sure if its legal to post a Movie on Youtube, but i didnt post it and it is online so its ok to watch so long as Youtube let us, isnt it?

So, my recomendation for every Whistle Player, ITM Liker and MMCN Musician for this weekend is:
Watch “The Boys from County Clare” online on Youtube, or right here.

Wikipedia says:
“The Boys From County Clare is a 2003 Irish comedy/drama film about a céilí band from Liverpool that travels to Ireland to compete in a céilí competition in County Clare. Directed by John Irvin, the film was released in Canada on September 12, 2003.

Plot/ Story
2 Brothers being verry different and long ago seperated but both being leaders of a Ceili band meet after many years again in an ceili competition. Both want to win, Both try to make the other one loose. A love story or two beside wont be missed. Plenty good Irish Music is played, quite natural language spoken, and some surprises round up that Story of this nice Movie. Beautifull pictures of Irelands Countryside and Pubs create a suitable atmosphere.

If you have Problems watching all 9 parts use this Link

Have fun and a nice Weekend with The Boys From County Clare a Great Movie about ITM Ceili Bands.